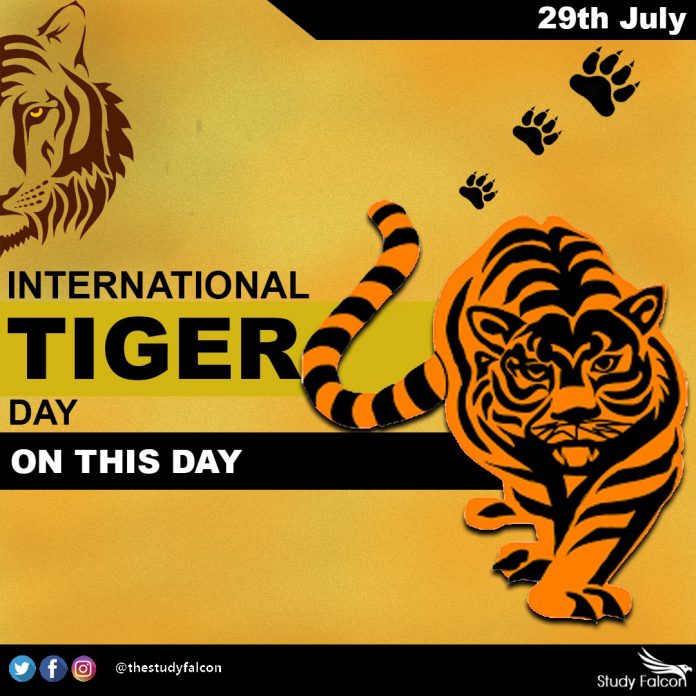 • International Tiger Day is celebrated every year on 29th July as a way to raise awareness aboutendangered big cats.
• Tiger, also called Panthera tigris, is one of the largest cat species surviving in some range of the world. It is a member of the genus Panthera.
• International Tiger Daywas originated in 2010 at the Saint Petersburg Tiger Summit in Russia.
• The representatives of the summit declared that the tiger populated countries would make efforts to almost double the tiger population by the year 2022.
• The theme for the year 2021 is “Their Survival is in our hands”.
• The importance of Global Tiger Day is to create awareness of the declining tiger population and conserving tigers globally.
• Observing World Tiger Day is also significant because, according to the World Wildlife Fund (WWF), currently, there are only 3900 wild tigers globally.
• They are also called the “Umbrella Species” as their conservation also conserve many other species in the same habitat.
• From the beginning of the 20th century, around 95% of the tiger population has been lost in various activities like poaching.
• Project Tiger was launched in India in the year 1973.
• Because of the planned efforts, India’s tiger population is 2967 tigers.
• India has 75% of the tiger population amongst the total global tiger population.
• To increase the tiger population, it is necessary to encourage more sanctuaries and natural reservoirs and control climate changes.