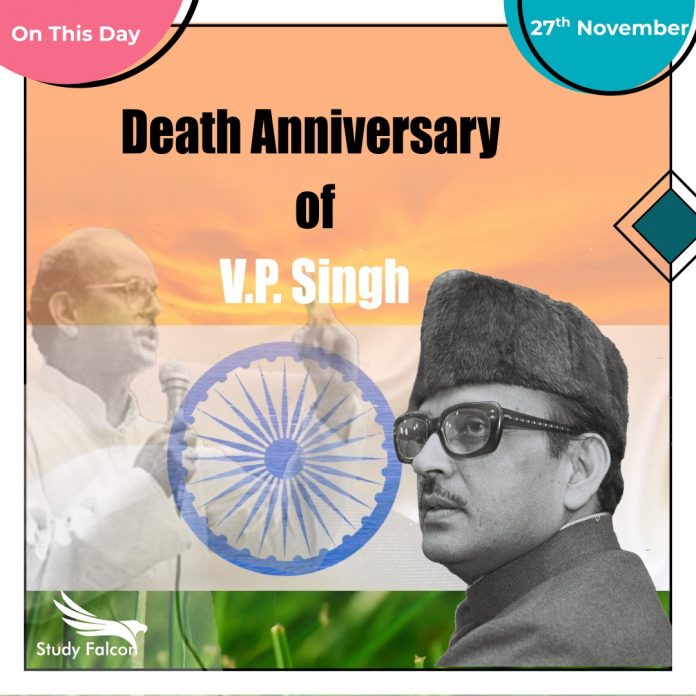 Who was V.P Singh?
Vishwanath Pratap Singh became the Finance Minister of India in 1984. This was the beginning of a new era of Indian politics marked by idealism, honesty and renunciation.

Early Life of VP Singh
He was born on 25 June 1931 — the third child to be born in the royal household of Daiya on the banks of the ancient Belan river in Allahabad. But fate had different plans for him. He was soon to be adopted by Raja Gopal Singh of Manda (from the Gaharvar clan) and at the tender age of 10 ascended the Manda throne in 1941. At the age of 26, Acharya Bhave called him a modern-day, “Siddharth”. This came nearly 1,000 years after another descendant of Jaichand (Kannauj) made his mark on history.

The career of VP Singh
VP Singh, the finance ministry dealt with defaulters including Tata, Reliance, Birla etc. Bravely attacking the defaulting corporate houses of India that had connections in the corridors of power, and was rewarded with a transfer to the Ministry of Defence.

In August 1990, V.P. Singh tabled the recommendations of the long-forgotten Mandal Commission report in Parliament, paving the way for reservation for the OBC community in central government jobs.

V.P. Singh made corruption a national issue. He went hammer and tongs at the Rajiv Gandhi government over the controversial Bofors gun deal and even resigned from the Cabinet to take his fight against corruption to the streets.

Legacy of VP Singh
In Singh, a champion for the poor and marginalizedis neededtoday to restore dialogue and debate, to restore the faith of minorities in our constitution and our country. A person who can perform political miracles yet be grounded, honest and fair. A political Siddharth, to help our society reform again before the forces of destruction lynch all that is sacred and holy within us.