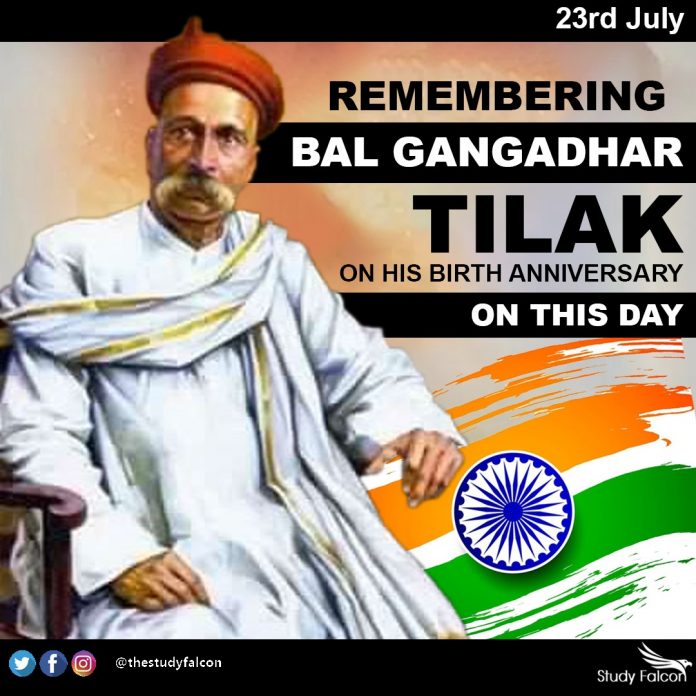 • Bal Gangadhar Tilak was born on 23rd July 1856 in Maharashtra.
• Tilak was an Indian nationalist, teacher and independence nationalist.
• Tilak was one-third of the Lal Bal Pal trio of extremist leaders
• Tilak was conferred with the title of ‘Lokmanya’ (accepted by the people) and also known as ‘Lokmanya Tilak’.
• Tilak was the founder of Deccan Education Society (1884) along with his associate Gopal Ganesh.
• Tilak was a devout Hindu and used Hindu scriptures to rouse people to fight oppression.
• Tilak popularized the Ganesh Chaturthi festival (1894) in the Maharashtra region.
• Tilak was one of the strongest advocates of Swaraj.
• Stressed on the need for self-rule and believed that without Swaraj progress is not possible.
• Tilak gave the slogan- “Swaraj is my birthright and I shall have it”.
• Tilak joined the Indian National Congress in 1890.
• Tilak opposed the Age of Consent Act 1891 because the English had no jurisdiction over the religious (Hindu) matters.
• In 1897 Tilak was sentenced to 18 months imprisonment in the Chapekar brotherscase.
• Tilak with the help of Jamshedji Tata established Bombay Swadeshi stores.
• In 1903, Tilak wrote the book “The Arctic Home in the Vedas”.
• Between 1908 and 1914 Tilak spent 6 years in Mandalay Prison in the sedition case.
• Tilak wrote “ShrimadhBhagvad Gita Rahasya” in prison at Mandalay – the analysis of ‘Karma Yoga’ in the Bhagavad Gita.
• Tilak visited England in 1918 as President of the Indian Home Rule League.
• Tilak suffered cardiac arrest and passed away on 1st August1920.