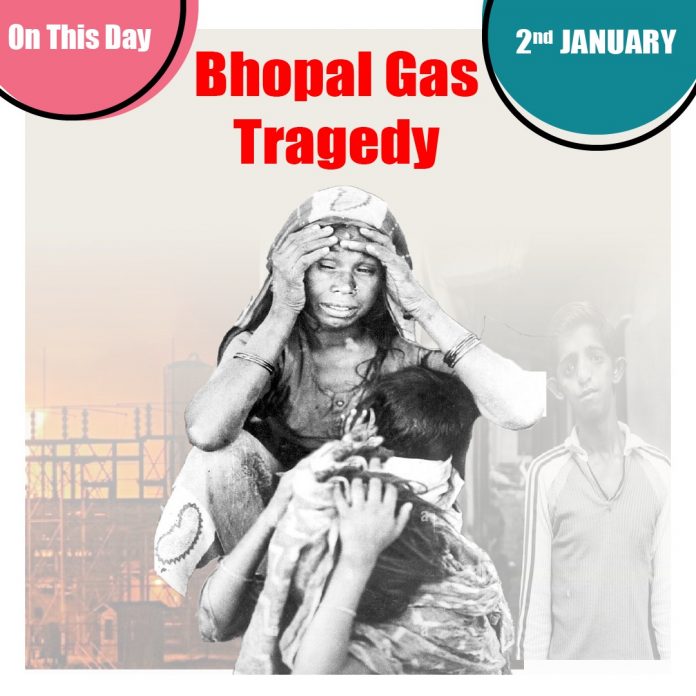 What was Bhopal Gas Tragedy?
The Bhopal gas tragedy was an industrial accident at a Union Carbide subsidiary pesticide plant in the city of Bhopal, Madhya Pradesh, India. On the night of 2-3 December 1984, the plant released approximately 40 tonnes of toxic methyl isocyanate (MIC) gas, exposing more than 500,000 people to toxic gases.

History of Bhopal Gas Tragedy
Union Carbide Corporation was asked to build a plant for manufacture of Sevin, a pesticide commonly used throughout Asia. The government itself had a 22% stake in Union Carbide India Limited. It built the plant in Bhopal.

On December 2 1984, an operator at the plant noticed a small leak of methyl isocyanate (MIC) gas and increasing pressure inside a storage tank. The vent-gas scrubber, had been turned off three weeks prior. At around 1.00 AM, a safety valve gave way sending a plume of MIC gas into the air. Within hours, the streets of Bhopal were littered with human corpses and the carcasses.

Causes of Bhopal gas Tragedy
The plant in Bhopal where the disaster happened started to produce ‘Carbaryl’, an insecticide in 1977. At first, the production was 2,500 tonnes per year, the plant had been designed for an output of 5,000 tonnes.

The disaster happened because water entered Methyl isocyanate. The resulting reaction increased the temperature inside the tank to reach over 200 °C (392 °F). The pressure was more than the tank. As a result, large amounts of toxic gases were released into the environment. The pipes were not well maintained. All the contents of the tank were released within a period of about two hours.

Causalities & Aftermath of Bhopal Gas Tragedy
Between 3,500 and 25,000 people died as a result of contact with the cloud of toxic gas. Up to 500,000 people were injured. Some of the chemicals led to birth defects.

In 1998, the Supreme Court of India reached a settlement with Union Carbide: They had to pay 470 million US dollars to the Indian state. Only very little money actually reached the victims.