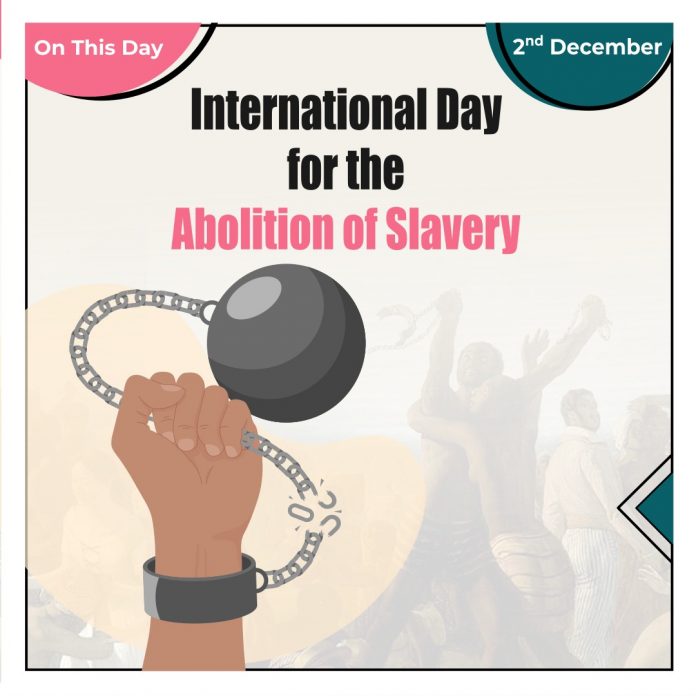 Till now the world has made massive progress still there are a large number of people who are victims of slavery. According to the International Labour Organisation (ILO), more than 40 million people worldwide are victims of modern slavery. And more than 150 million children are subject to child labour, accounting for almost one in ten children around the world.

According to the UN, women and girls are disproportionately affected by forced labour, accounting for 99% of victims in the commercial sex industry, and 58% in other sectors.

History of International Day for the Abolition of Slavery
The Convention for the Suppression of the Traffic in Persons and of the Exploitation of the Prostitution of Otherswas approved by the United Nations General Assemblyon December 2, 1949.

Besides, by resolution 57/195 of 18 December 2002, the Assembly proclaimed 2004 the International Year to Commemorate the Struggle against Slavery and its Abolition.

According to ILO estimates, the minimum number of persons in forced labour, including sexual exploitation, at any given time as a result of trafficking is 2.45 million. The inhumane activity involves coercion, abuse of power and human rights violations. The crime of trafficking in persons for the purposes of exploitation be it for labour, sexuality or organs, presents a distinctive set of challenges to most countries.

Yet conditions in the current era of globalization such as the growth of informal economies and economic disparities between nations, increasing flows of labour and commodities across international borders, and transnational organized criminal networks are causing human trafficking to flourish on a global scale.