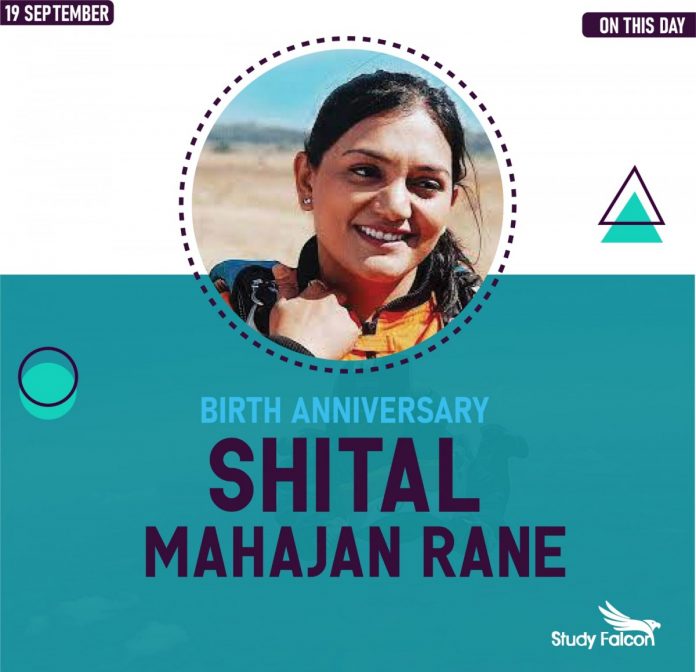 Profession
Shital Mahajan Rane is an Indian sportsperson, skydiver and the holder of eight world records in the sport.

Early Life
Shital Mahajan Rane was born on 19th September 1982 at Pune, Maharashtra. She was fascinated by Para-jumping and tried to get training at Indian Navy facilities but was refused entry by the authorities.
With the assistance of the then Indian president, APJ Abdul Kalam, she joined the National Defence Academy for training in skydiving and Para jumping. Her first jump was on 14 April 2004 after which she is reported to have achieved 652 jumps.

Achievements
Shital Mahajan is the founder of Phoenix Skydiving Academy, a skydiving training centre based in Pune. The academy, established in 2012, provides training facilities to aspiring students for skydiving competitions around the world.
She is the first woman to perform a free fall jump over the South Pole, which was completed on 15 December 2006. She also became the first woman to perform successful jumps over the North and South Poles, without trials. She is the first Indian woman to perform a wingsuit jump with a US certified skydiver. She is the first Indian civilian woman diving coach.
She was a part of the team that created a world record as the first team to perform a free-fall parachute jump over Antarctica. She has also led a team of 85 Indian skydivers to achieve a record for maximum tandem jumps in an hour, the jumps performed on 25 August 2014 in Spain. Her jump from 13000 feet performed on 19 April 2009 is also a record for the height in the women’s category.

Awards
In 2005, Mahajan was awarded Godavari Gaurav Puraskar and received the Shiv Chatrapati Maharashtra State Sports Special Award which was followed by the Venutai Chavan Yuva Puraskar.
In 2004, after her successful jump over the North Pole, she received the Tenzing Norgay National Adventure Award, making her the first civilian to receive the award. In 2001, she was included in the list for Republic Day honours for the fourth highest Indian civilian award of Padma Shri.