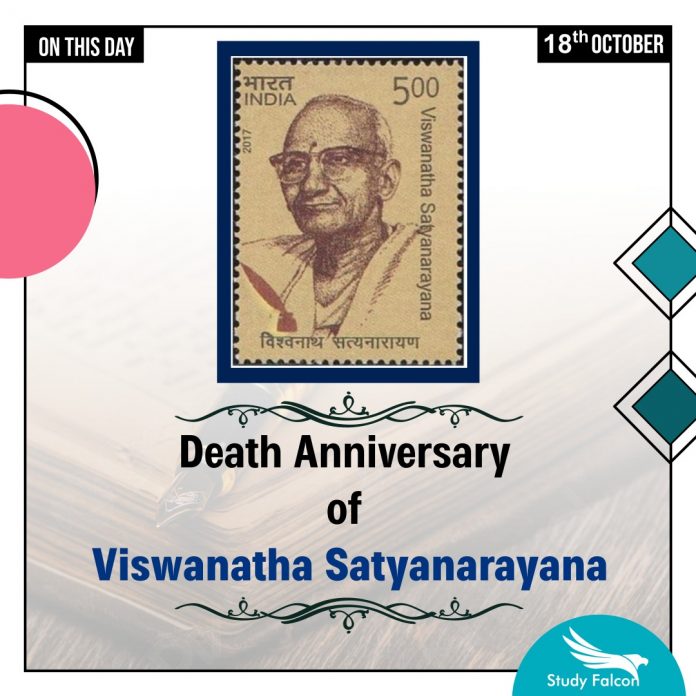 Who was Viswanatha Satyanarayana?
The legendary Sri Viswanatha Satyanarayana was a 20th-century Telugu writer, widely known as Kavi Samrat (Emperor of Poets). He is the first writer to impart a true Teluguness to the Ramayana. His works included poetry, novels, dramatic play, short stories and speeches, covering a wide range of subjects such as analysis of history, philosophy, religion, sociology, political science, spiritualism etc.

Early Life
Viswanatha was born on 10th September 1895 in Vijayawada, Andhra Pradesh. He was deeply influenced by the village culture and street folk art forms which impressed him. At the age of eleven he shifted to a well-known Nobel College in Bandar.

He worked as the first principal of Karimnagar Government College during 1959 to 1961.

His most celebrated works are Srimad Ramayana Kalpavruksham and Veyipadagalu. His work Veyipadagalu was later translated into Hindi by former Prime Minister PV Narasimha Rao as Sahasrapahan.

Awards and Legacy
The renowned poet was honored with various prestigious awards. In 1964 Andhra Viswa Kala Parishat gave him the honorific “Kalaprapoorna”. He also received the honorific of ‘Kavi samrat’ (emperor of poets). Sri Venkateswara University honored him by giving D.Lit Degree for his outstanding work. In 1970, he was awarded with Padma Bhushan by Government of India and was honoured as Andhra Pradesh Governments’s laureate. In 1971 he was awarded with Jnanpith Award, through this he became the first Telugu writer to claim this title.