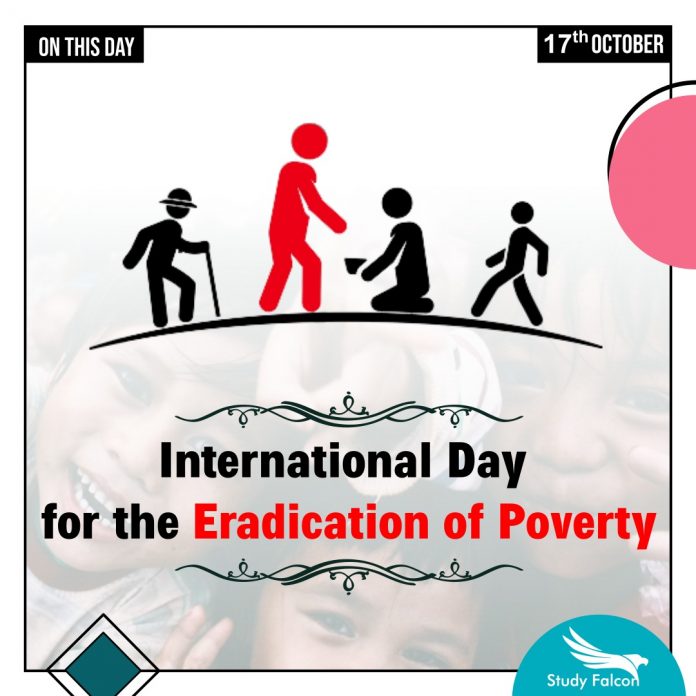 Significance
Every year 17th October is observed as International Day for the eradication of Poverty. The day highlights worldwide poverty, violence and hunger. Poverty is a violation of human rights and there is a need for people from across the world to come together to ensure that these rights are respected. Without achieving a poverty-free world, it is hard to imagine the development of humankind. UNESCO claims that the sustainable fight against poverty requires the strengthening of individuals’ and puts all its expertise at the service of the 2030 Agenda for Sustainable Development, and in particular Goal 1 “End poverty in all its forms everywhere “.

According to the latest “Poverty and Shared Prosperity Report” by the World Bank, the Covid-19 pandemic is estimated to push an additional 115 million to 150 million people into extreme poverty in 2021.

History
On 17 October 1987, over a hundred thousand people gathered on the Human Rights and Liberties Plaza at the Trocadéro in Paris, where the Universal Declaration of Human Rights was signed in 1948, to honour the victims of extreme poverty, violence and hunger at the unveiling of a commemorative stone by Joseph Wresinski, founder of the International Movement ATD Fourth World. Since then, people of all backgrounds, beliefs and social origins have gathered every year on October 17th to renew their commitment and show their solidarity with the poor.

In 2008, the International Committee for October 17 was launched to promote the International Day for the Eradication of Poverty in its founding spirit. The composition of the committee is unique with members including people who had experienced extreme poverty and human rights defenders who are engaged in the fight against poverty.