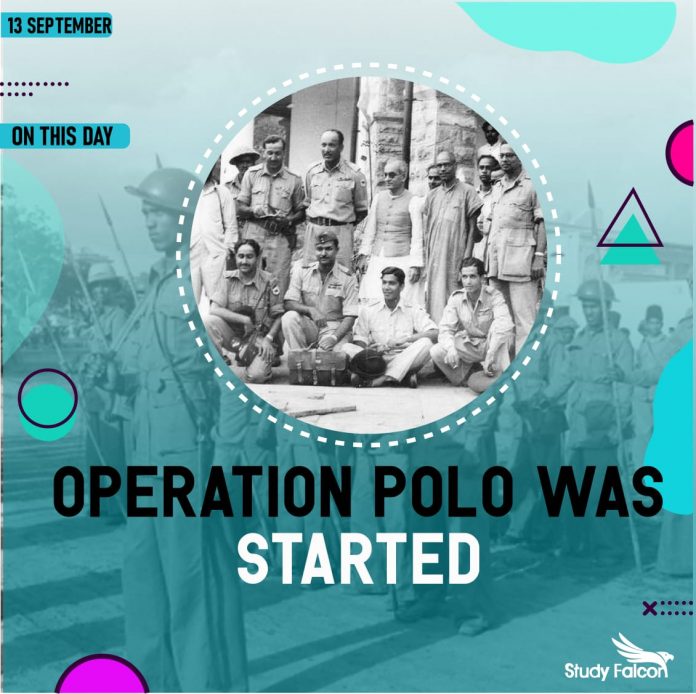 SIGNIFICANCE
Operation Polo is the code name for the police action against the Princely State of Hyderabad in September 1948 by the newly independent republic of India.

The Indian Army marched into Hyderabad on 13th September following the outbreak of Operation Polo.

BACKGROUND
During the partition of India in 1947, the princely states governed their realms on their own but were still subject to the Subsidiary Alliance system that gave the British control over their external affairs.

After the Indian Independence Act 1947, the policy of subsidiary alliances was abandoned and the princely states were given three options to decide their future which were, accede to India, accede to Pakistan or remain independent.

By 1948 most of the Princely States had acceded to India but the state of Hyderabad had chosen to join neither Pakistan nor India.

Hyderabad was ruled by the Nizam, Mir Sir Osman Ali Khan, Asaf Jah VII.
He presided over a largely Hindu population hoping to maintain his independence with an irregular army largely recruited from the Muslim aristocracy, known as the Razakars. India was not keen on letting a wealthy and powerful princely state be left to its own devices.

Events within Hyderabad, such as the Telangana uprising and militant Razakars gave way to fears of instability engulfing the region. Therefore, the Government of India decided it would be prudent to undertake a military operation to annex Hyderabad.

AFTERMATH
The Indian military detained thousands of people during the operation, including Razakars, Hindu militants, and communists.

General Joyanto Nath Chaudhuri led an armoured column into Hyderabad at around 4 p.m. on 18 September and the Hyderabad army, led by Major General El Edroos, surrendered.

This was largely done based on local informants, who used this opportunity to settle scores. The estimated number of people detained was close to 18,000, which resulted in overcrowded jails and a paralyzed criminal system.

The Nizam had abdicated upon the surrender of Hyderabad and the princely state ceased to exist. Subsequently, the Nizam signed an instrument of accession, joining India.