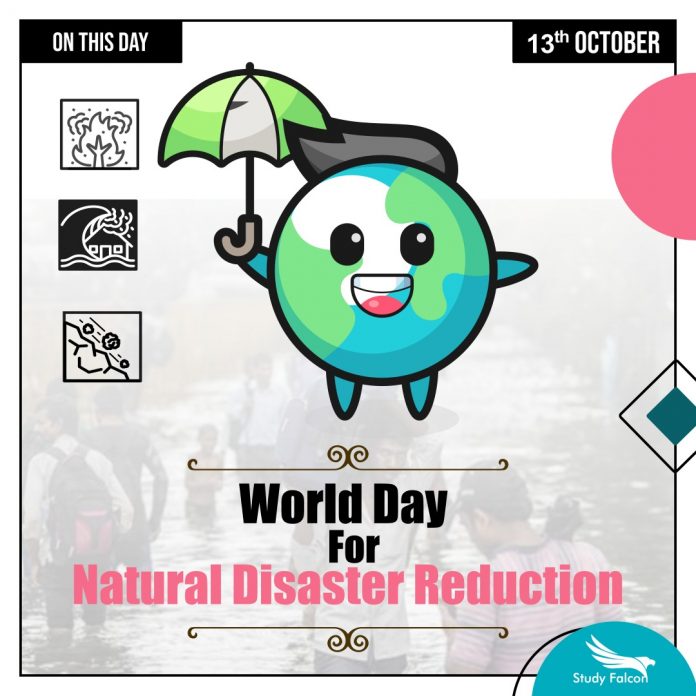 SIGNIFICANCE
The International Day for Disaster Reduction (IDDR) is an international day that encourages every citizen and government to take part in building more disaster-resilient communities and nations.

HISTORY
The International Day for Disaster Risk Reduction was started in 1989, after a call by the UN General Assembly (UNGA) for a day to promote a global culture of risk-awareness and disaster reduction.

In 2002, by a further resolution, the General Assembly decided to maintain the annual observance as a vehicle to promote a global culture of natural disaster reduction, including prevention, mitigation, and preparedness.

In 2009, the UN General Assembly decided to designate October 13 as the official date for this day, and also changed the name to International Day for Disaster Reduction.

The Day celebrates how people and communities around the world are reducing their exposure to disasters and raising awareness about the importance of reining in the risks that they face.

THEME
In 2021, the International Day for Disaster Reduction focuses on “International cooperation for developing countries to reduce their disaster risk and disaster losses”.

It will highlight best practices and examples of international cooperation that have a positive impact on the lives of people who live in disaster-prone parts of the world i.e. reducing the numbers of people affected by man-made and natural hazards, in line with Target F of the Sendai Framework for Disaster Risk Reduction 2015-2039.

This year’s theme is focused on conveying the message that many disasters can be avoided or prevented if there are disaster risk reduction strategies in place to manage and reduce existing levels of risk and to avoid the creation of new risks. In short, “good disaster risk governance.”