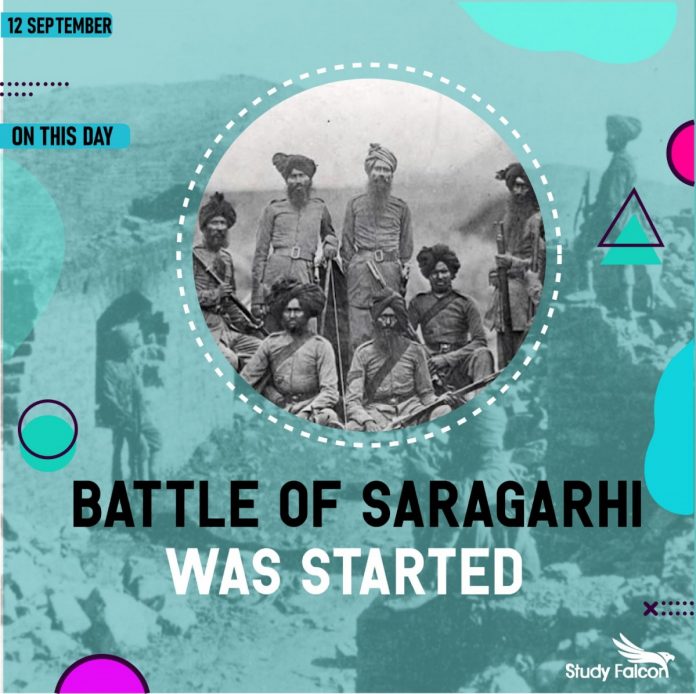 SIGNIFICANCE
Battle of Saragarhi is one of the greatest last stands in military history where 21 Sikh soldiers held fort against more than 10,000 rampaging Pashtun tribesmen for over six hours.

The Battle of Saragarhi was fought before the Tirah Campaign on 12 September 1897 between the British Indian Empire and the Afghan tribesmen.

BACKGROUND
Fort Gulistan and Fort Lockhart in Afghanistan were two fortresses under British control at the time. The forts would communicate with each other by using mirrors to flash Morse Coded messages.
Distance between them was large so, Saragarhi was set up as a signalling station.
21 soldiers from the 36th Sikh Regiment were deputed to guard this post.

On the morning of 12 September, a Solider at Saragarhi Sepoy Gurmukh Singh signals to Colonel Haughton, situated in Fort Lockhart, that they are under attack.

The soldiers in Saragarhi decide to fight to the last to prevent the enemy from reaching the forts.
Sepoy Bhagwan Singh is the first soldier to be killed.

Sepoy Gurmukh Singh, who communicated the battle to Haughton, was the last surviving Sikh defender. He asked for permission to close the heliograph and take up his rifle.
He is stated to have killed 20 Afghans, the Pashtuns having to set fire to the post to kill him.

As he was dying, he was said to have yelled repeatedly the Sikh battle cry “Bole So Nihal, Sat Sri Akal!”

AFTERMATH
The 21 Sikh soldiers killed between 180-600 Afghan tribesmen.
Eventually, each of the soldiers succumbed, but they had fought through the day, giving Fort Lockhart and Fort Gulistan enough time to prepare.
They had also inflicted heavy losses on the invading forces. Saragarhi fell, but was soon recaptured by the British forces.
The 4th battalion of the Sikh Regiment of Indian Army commemorates the battle every year on 12 September, as Saragarhi Day.