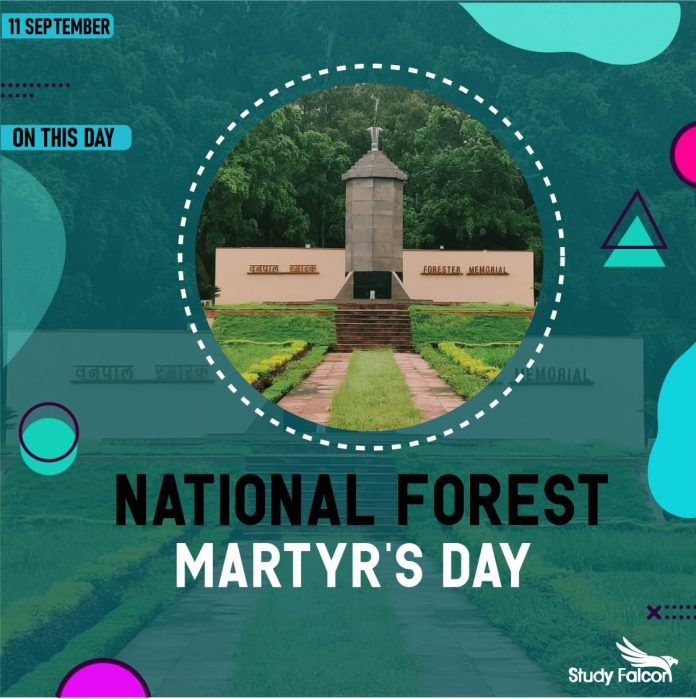 SIGNIFICANCE
National Forest Martyr’s Day is observed in India on September 11 every year to remember the sacrifice of those who laid their lives to protect the forests and wildlife across the remote corners of the country.
Around 1400 forest officials have been martyred while protecting the country’s forest wealth and wildlife.

BACKGROUND
The National Forest Martyrs Day is observed to commemorate the Khejarli massacre. It took place on September 11 in 1730.
During the massacre, Rajasthan’s Maharaja Abhay Singh started cutting the Khejarli trees, which were considered to be the sacred tree in the Bishnoi community in Khejarli village in Rajasthan.

Amrita Devi stood up in resistance and offered her head instead of the Khejarli trees.
The army of Abhay Singh beheaded her and her three daughters who stood up in resistance after their mother.
The decapitation continued until 359 more men from the Bishnoi community were beheaded by the army before the news of the massacre reached the king himself.

When Abhay Singh heard the news of the carnage, he immediately ordered his men to stop the cutting of the trees and honoured the courage of the Bishnoi community.
The King apologised to the community and issued a decree engraved on a copper plate to prohibit the cutting of Khejarli trees and the hunting of animals within and near Bishnoi villages forever.

HONOR
The Ministry of Environment and Forest made the declaration to celebrate this day for the first time in 2013.
Since then, people across India observe National Forest Martyrs Day every year on September 11 to pay tributes to the valour and sacrifice made by the forest personnel to protect the forests and wildlife of India.
The Massacre was an inspiration for the 20th-century environmentalist Chipko Movement.
A foundation pillar has been laid down at the memorial site near Forest Research Institute Campus in Dehradun, Uttarakhand.

Read More
PM Modi on One Nation, One Election
International Day of Solidarity with Palestinian People Is Observed