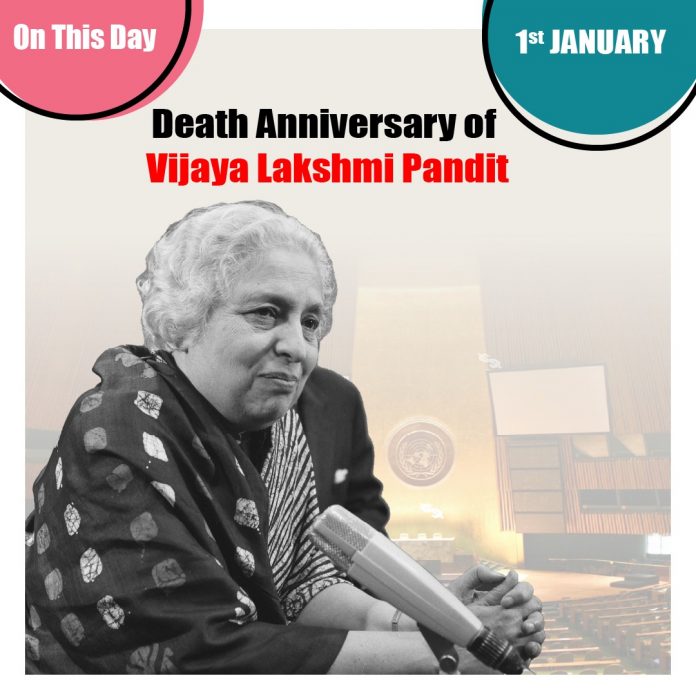 Who was Vijaya Lakshmi Pandit?

Vijaya Lakshmi Pandit (18 August 1900 – 1 December 1990) was an Indian diplomat and politician who was the first woman appointed to 6th Governor of Maharashtra and 8th President of the United Nations General Assembly.

Vijaya Lakshmi’s father, Motilal Nehru (1861–1931), a wealthy barrister who belonged to the Kashmiri Pandit community, served twice as President of the Indian National Congress during the Independence Struggle.

In 1921, she was married to Ranjit Sitaram Pandit (1893–1944), a successful barrister from Kathiawar, Gujarat and classical scholar who translated Kalhana’s epic history Rajatarangini into English from Sanskrit. He was arrested for his support of Indian independence and died in Lucknow prison in 1944.

Pandit was the first Indian woman to hold a cabinet post in pre-independent India. In 1937, she was elected to the provincial legislature of the United Provinces and was designated minister of local self-government and public health. She held the latter post until 1938 and again from 1946 to 1947.

In India, she served as Governor of Maharashtra from 1962 to 1964, after which she was elected to the Indian parliament’s lower house, Lok Sabha, from Phulpur, from 1964 to 1968. Pandit was a harsh critic of Indira Gandhi’s years as Prime Minister especially after her niece had declared the emergency.

Following India’s freedom from British occupation in 1947 Vijaya Lakshmi Pandit entered the diplomatic service and became India’s ambassador to the Soviet Union from 1947 to 1949, the United States and Mexico from 1949 to 1951, Ireland from 1955 to 1961 during which time she was also the Indian High Commissioner to the United Kingdom, and Spain from 1958 to 1961.

Her writings include The Evolution of India (1958) and The Scope of Happiness: A Personal Memoir (1979).